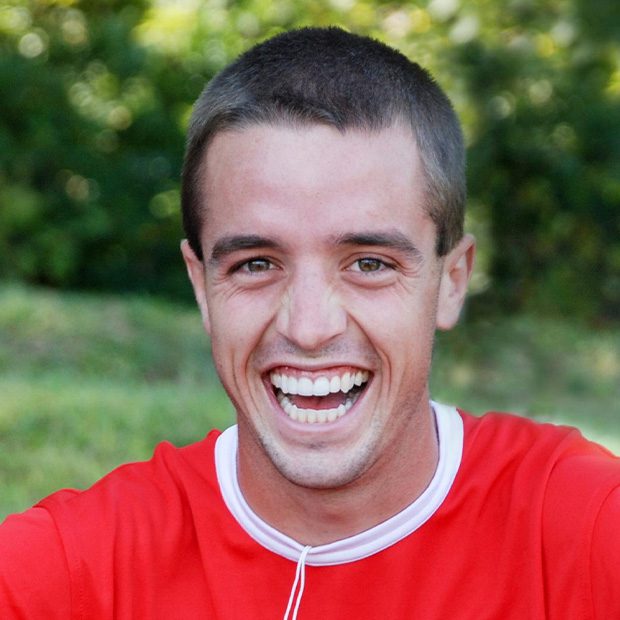 Lee was so much more than a soccer player.
He simply was the best teammate anyone who played with him ever had.
He encouraged you, brought out the best in you, challenged you in all the right ways, loved you deeply, and cared for you, no one had a bigger heart than Lee Rickman.
A History major at Bryan, Lee was an outstanding student.
As a student-athlete, Lee’s accomplishments included:
·  3-time Academic ACC All-Conference 2009, 2010, 2011 (To receive the Academic All-Conference award the recipient must be at least a sophomore and have at least a 3.25 GPA)
·  2-time Daktronics NAIA Scholar-Athlete 2010, 2011 (student-athlete must maintain a minimum grade point average of 3.5 on a 4.0 scale and must have achieved junior academic status to qualify for this honor)
·  2011 Capitol one academic all American The 2011 Capital One Academic All-America College Division Men’s Soccer Team, as selected by the College Sports Information Directors of America (CoSIDA) Lee was a senior and at the time of the award had a 3.83 GPA as a History (Secondary Education) major. At the time of the nomination, he had played in 9 of 14 games for the Lions his senior season (In order to be nominated for the award, the nominee must have made the Academic All-District First Team. In order to be voted onto that team, the student-athlete had to be a starter or important reserve with legitimate athletic credentials and must have participated in at least 50 percent of the team’s games. Nominees must have a cumulative grade point average of at least 3.30 (on a 4.0 scale). Nominees must have reached sophomore athletic and academic standings at the institution.
As an athlete, Lee played at Bryan during a time when the men’s soccer program experienced much success on the field.
In his four years, Lee and Bryan Men’s Soccer achieved the following:
·  2008 ACC Regular Season Champions
·  2009 ACC Conference Tournament Champions
·  2009 NAIA National Tournament Opening Round
·  2010 ACC Regular Season Champions
·  2010 ACC Conference Tournament Champions
·  2010 NAIA National Tournament Opening Round, hosted and won
·  2010 NAIA National Tournament Sweet 16
·  2010/11 NAIA National Ranking #9 – to this day, a program high.
Lee loved reading, camping, fishing, hunting, music, basketball, and friends.
His favorite college team was Florida State, his professional football (soccer) team Manchester United, his favorite player Roy Keane, his favorite musicians U2, Coldplay, Ben Rector, and his favorite movies, Braveheart, Miracle, and Gladiator.
Lee loved his family! His older siblings Jenny and Will, and younger brother Matt. His parents Tim and Patti meant the world to him. They would all tell each other LYG (Love Your Guts!) and they meant it!
In the years that followed Lee’s time at Bryan, he began working on a Master’s Degree in History from Kansas State University, worked as a Camp Counselor at Kanakuk Kamps in Missouri for 3 summers, moved to Wichita, Kansas, and taught Middle School History at Trinity Academy for one year, while working with basketball teams at the school. Then Lee landed back where it all began. At the time of his death, Lee was an interim 6th-grade teacher at his alma mater, Wesleyan Christian Academy. Ready to start the new school year as a full-time teacher. At the center of everything Lee has ever done, there was a love for children.
Lee challenged his students to have “big ears” to listen to God’s wisdom, and “quick feet” to respond and move in that direction.
Lee loved Jamaica, the people, the children, and the opportunity to make an impact through serving and loving. He had gone on this same mission trip with his high school as a student, and now he was back for the first time leading the trip as a teacher. On the trip, Lee left a note to a student encouraging him to “never lose sight of doing big things for the cross”
It was on this trip that Lee was killed. A tree fell from a height, while Lee and the students were having a fun, relaxing time at a waterhole enjoying each other’s company and Jamaica’s beauty when the tragedy occurred. Lee was 25 at the time.
One of Lee’s favorite Bible verses was Proverbs 3:5-6 “trust in the Lord with all of your heart and lean not on your own understanding”
“In all of your ways acknowledge him and he will make your paths straight” Lee lived this out.
By the way he lived, you couldn’t help but ask yourself “what makes this guy different?”
He has been honored in his hometown with a race in his memory, and at his former high school, where the varsity boys soccer team wear a practice shirt with his name and number every year since his passing.
He left behind him a legacy of impacting others with how fiercely and passionately he lived life. Lee loved Jesus. And if you loved Lee, you couldn’t help but get a taste of Jesus at the same time. Lee lived in such a way that the two were inseparable, you couldn’t have one without the other.
Lee simply was, the best teammate anyone who played with him, ever had.
He is most deserving of celebration and recognition, and those who knew him and loved him could not be prouder to tell his story.